February Nature Notes at the farm 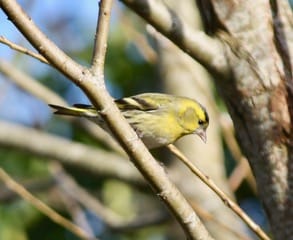 Flocks of siskins have been regular visitors to the farm during February. Siskins are resident Finches with lemon-yellow plumage, long, narrow curved bills and forked tails

They have joined the flocks of long-tailed tits feeding up and down the hedgerows. Siskins eat seeds mainly from conifers, alders and birches, and they are known sometimes to eat insects, but only if they are available. As is the case with many birds in the UK and Ireland, hard frosts can render insects inaccessible over winter, and therefore birds like Siskins will readily take seeds from a variety of sources, including feeders. 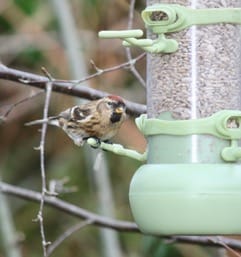 The highlight for January was a visit by a pair of Redpolls which turned up right on cue for the Great Garden Birdwatch on Sat Jan 26th. Over the space of one hour we saw 14 species of birds in the area around the community garden – Robin, Blackbird, Great tit, Blue tit, Coal tit, Long-tailed tit, Gold finch, Chaffinch, Bullfinch, Jay, Redpoll, Wood pigeon, Dunnock and Collared Dove.

We are also keeping an eye out for the sight of a Brambling which have been seen in a few places in Northern Ireland over the past two months.

The photos of the redpoll, siskin and  long-tailed tit were taken in the farm’s hedgerows during February. 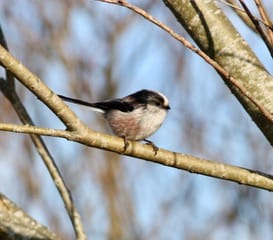