The amount of fruit and veg sold in the UK containing a “cocktail” of pesticides has risen in the last year with strawberries and lemons topping the list, an annual pesticide ranking list has revealed.

The so-called ‘Dirty Dozen’ list, which is compiled by the Pesticide Action Network (PAN UK) using government testing data, ranks the fruit and veg that are most likely to contain a cocktail of pesticide residues, with the aim of helping people prioritise what to eat under an organic and non-organic diet.

The list of the 12 worst offenders was topped by strawberries with almost 90 per cent of those tested containing residues of more than one pesticide.

Lemons and prepacked salad leaves came a close second and third, with pesticide cocktails found in more than 80 per cent of tests. Individual samples were found to contain the residues of anywhere up to 14 different pesticides.

“Pesticide residues aren’t listed anywhere on food labels so the Dirty Dozen is the only way for British consumers to get a sense of which pesticides appear in their food,” said Nick Mole, policy officer at PAN UK. “Most of us can’t access a fully organic diet so we hope this information will help people work out which produce to prioritise”.

Strawberries are most likely to contain pesticide residues, according to the Dirty Dozen.

Just under a third (32 per cent) of all food tested by the government in 2019 (including meat fish, grains and dairy) contained multiple pesticides, up from 23.5 per cent the previous year.

On fruit and veg, 48 per cent of those tested contained a mixture of pesticides, up from 36 per cent on the prior year. Fruit was particularly high, with 67 per cent containing multiple pesticides, as were grains, with 94 per cent of oats and 27 per cent of bread.

Mole added: “The Dirty Dozen reveals that pesticide cocktails remain extremely common in UK food and should be of deep concern to consumers.

“There’s increasing evidence that chemicals can be more harmful when combined, particularly to pregnant women and young children, but we continue to set safety limits for just one pesticide at a time.”

Despite attempts by regulators, PAN UK said it has proved impossible to create a system sufficiently sophisticated to be able to assess the health impacts of long-term exposure to multiple pesticides.

The only way to minimise the risk is to hugely decrease overall pesticide use, the organisation said.

The news comes ahead of the government’s long-awaited National Action Plan on the Sustainable Use of Pesticide, due to be published soon, to introduce a pesticide reduction target and increase financial and other support to British farmers to adopt non-chemical alternatives. 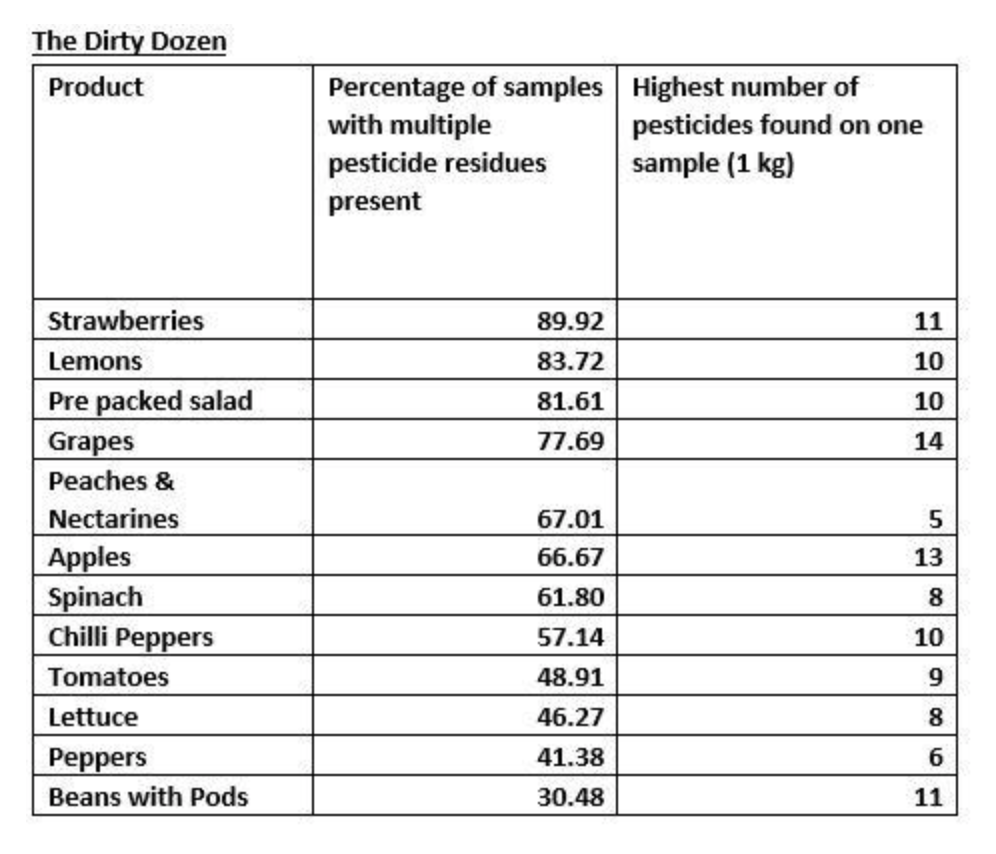